Xbox, partnered with FIFA to use print marketing to detail a match report that was reactive, relevant and on trend. The innovative message educating customers on how to play the game, using print media had a lot of success. The Xbox approach was different from the rest as it was, part match report, part user manual. Detailing how Ronaldo scored his best goals during the Champions League Final and let users know how to imitate these actions during the game by placing gaming language next to the reported movements. The publication received over 100 million impressions and assisted in building the anticipation to over 650 million spectators for the Champions League fixtures. Print has a certain gravitas when used to advertise a fun, interactive message. The match report developed for consumers displayed finesse on a cost-effective budget. 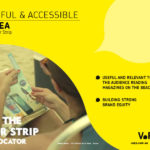